A little more than a year ago, I posted about my "new girlfriend" and how everything came to be in the process of meeting from match.com, and meeting all my friends, going to Quakecon, and then making it official.

During the past 14 months, 10 of which were spent living together, everything has gone pretty smooth. I've been able to adjust to having someone else around the house with me - which has been aided with her busy schedule, giving us each some alone time during the day, but also some time together. I think it has reached a good balance.

We have our share of tickle wars and face-noms (think: goldfish lips on your cheek, with each "nom" counting as a fictitious +1 point.) games while laying together on the beanbag. Things have been about as easy-going as I suppose they should be.

I am pretty sure that there is no one else who could fit my personality better than her, except myself. We provide a good balance for things we see differently, and share enough common quirks that it keeps things fun.

So this past August, I started looking at engagement rings trying to match what she was interested in (and not interested in)...I wanted something red, without much diamonds, and uniquely her. My original thought was to find the reddest pearl I could get, but after a search online, most of them were a light pink, and difficult to find. So I turned to the gemstone variety. But the ring I wanted was out of stock until October. So I had to wait. Meanwhile she kept dropping hints including the phrase "I have to marry you." If that's not a big enough hint for a guy at a positive answer, that guy doesn't need to be in a relationship. October came, and I had enough money saved up, so I bought the ring...a 10k Gold Garnet ring with very few diamonds on it.

When I ordered it, it was scheduled to arrive the following Monday - so I ordered a couple other things so that I'd get a barrage of packages, hoping to conceal its arrival amongst all the others. I bought a customized FlipVideo ultraHD digital recorder (to record everything from the Engagement, to the Wedding, to our kids first what-evers...since I've never owned an actual video recorder), and (what turned out to be a dud) a VGA-to-RCA/S-Video adapter to connect my laptop to the tv in the bedroom.

Unfortunately, the video recorder arrived while she wasn't at home, but the ring and adapter arrived when she was...and the ring came that Friday instead of the following Monday. Since she intercepted the package, I had to go find things that would look like I could have ordered them, but didn't want her to see. Fortunately, that Friday was also the company cookout at work, and I needed to go to the store to pick up some food to bring for the lunch. I grabbed some bags of chips, and happened to see Iron Man 2 on DVD while checking out - perfect! She loves Iron Man, and Robert Downey Jr. even more.


Once I had that part of the package, I had to find something that could have represented the bulge in the envelope where the ring box was, since she got to touch it. It was off to Toys R' Us to find an Iron Man action figure that could have fit inside the envelope. It turned out that the Toy's R' Us shut down where I live, and was converted into a Halloween City. Lame. So it was off to the Target right across the street in hopes that they too would have some toys. And they did...


While I was about to leave, I decided to stop by the Video Game section to see if they had Boom Blox for Wii, since I'd been wanting to pick that up for a couple months now...and I needed a reason to have a Target Bag in my possession...and as luck would have it, they did! So then it was off to her work to tell her that I finally got the video game we have been looking for, and that I had "some surprises at home for you. You'll have to wait and see what they are when you get home. I'm not going to tell you what is in the envelope."


[After everything went down, she said she remembered the name on the envelope from the ring website. So she didn't really buy into the notion that I ordered anything Iron Man in the mail. Oh well...my fault for not having the ring sent to my work instead of home.]

When she got home that night we watched Iron Man 2 and she opened her toy, and everything went as planned.


After about a week of sitting on the ring, I couldn't think of any special events going on in the coming days, to actually base the proposal on. I did find out via one of my friend's blogs that he was also working on his "big news" for next month - so I had to get mine taken care of now (in time for it to wear off for his) or push it back till December. But sitting on a perfectly good ring for another 2 months, when she could be wearing it didn't make any sense to me.

She mentioned that she had Saturday night off since she only worked during the day - so I figured we could go to Downtown Fort Worth, to Sundance Square and have some Uno's Pizza, and then I'd go to a little gazebo area between a couple restaurants, and if it was secluded enough, I could propose there. Then afterward, we could hit up the Theater, and watch RED.

The Plan for notifying everyone was to check in at Uno's Pizza with "pizza with the gf @ Uno's Pizza", and then to check in at the theater with "going to see RED with the Fiance @ AMC-9" and let people gleam the excitement from just those two posts until I could update my status on the computer.

It didn't quite work out like I wanted, because my phone couldn't get GPS coordinates inside the pizza building. While we were eating though, we did shoot a video for her sister to show just how deliciously messy the Pizzaria Uno's Chicago Classic pizza is...


Then we headed off to find the gazebo since we still had another 2 HOURS before the movie started. The gazebo was full of people eating from all 3 restaurants, so that wasn't going to work - and I was at a loss. Things just weren't coming together quite right. On the way to the car to drop off the pizza left overs and pick up her sweater, we happened to see a Cinderella Carriage pulling some folks down the street, and she commented "that would be fun to do if you had to ask me, say, an important question *wink wink*" which I laughed off and commented that I've never been on one before, but since we have 2 hours, we could check it out.

I flagged the driver down and found out where they were loading, and then we headed over there to find out how much it cost and played with the video camera a little bit. The guy that was handling the transactions was also taking pictures for people with their cell phones, and I took a couple shots to make sure my phone would produce a decent picture.

Jenna had a couple sips of some Sangria at Uno's and I had some Raspberry Colada. alcohol doesn't affect me at all, but for her, just one drink will do it...and she started getting goofy while we were waiting for the carriage to return...


I don't remember what started the "in the butt" phrase for that video, and I wasn't intending on recording anything she said - I was actually testing out the night-capabilities of the FlipVideo ultraHD and she just started talking.

The carriage arrived, the guy took an unflattering picture that included my unflattering belly, and then we were off. During the first part of the ride (when the camera was on) I found it difficult to not look at the camera to see if it was pointing correctly...but I also looked nervous because it was a 10 minute ride, and I had to find a time to sneak the ring box (which had a lot of purple frilly wrapping and a tassel rope) out of my cargo pocket, while she wasn't looking. Fortunately, we passed by the Reata and the roof-top plant sculptures caught here attention. So I pulled out the box, and after a few seconds she finally noticed it on my lap by our hands...


And the rest is history. We finished the ride, then went to hang out at the Barnes & Noble/Starbucks where I finally updated all 3 check-in's at once, and about an hour later we saw the first movie of our Engaged lives.

I didn't think any girl would actually want to have a Cinderella Carriage ride - I figured that was too cheesy. But she said it was perfect, and even though she knew I had ordered a ring, she was still surprised that it was happening.
By: Unknown @ 10:52 1 comment: 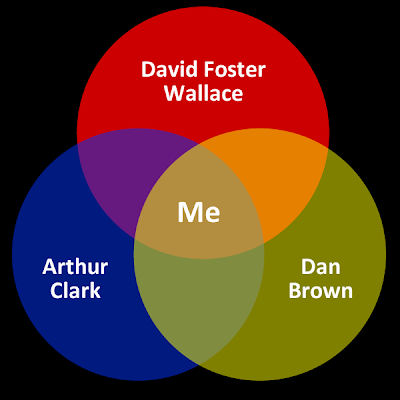 After submitting my three most recent blog posts to the I Write Like text analyzer, I apparently have different writing style for each post - these three I can definitely see as being the ones I write like: